The Samsung Galaxy A40 was released in April 2019.

Hi there, Firstly, the phone we have was not listed. My son has a samsung A40 (UK) after only having it for a few months the phone stopped charging. We bought a new cable and checked socket etc but still nothing. We contacted the provider who told us to take it to car phone warehouse. They said that it was a faulty charging port and that it wasn't covered under warranty. They also said that they will wipe the phone should we chose to have them repair it, as this was their standard procedure. My son had not been able to back his phone up as it had died at this point and didnt want them to wipe it. So, as I have repaired a fair few phones in the past, I bought the part (a small circuit board pba) and easily swapped them over, however, the phone was still not charging. I even bought a second one just in case the part was faulty, but it still won't charge. I cannot perform any software troubleshooting as the phone is dead. Any help would be greatly appreciated. Kindest regards Claire xx

Hi, I would be interested to hear how you’ve got on with this please as we are having exactly the same issue with the same phone that is only 9 months old. No damage done to the charging port but I have ordered a replacement to try to fix it myself.

Hi there, I'm sorry, I can't really offer any advice. I've changed the part twice (just in case the first was faulty) but it's still dead as a dodo! We have been trying to sort it with the provider but due to their shop's being closed due to Covid-19, we haven't been able to sort it. Sorry I couldn't be of any help, please let me know if you make more progress than me. Kindest regards Claire xx

Hi, I have exactly the same problem, my A40 just won't charge. I cannot find any information on the software fix, my phone still has battery so I would like to try that , anyone can help ?

Whilst your phone still has battery, does it have the most up to date software? To check go to settings, software update I think and it should tell you in there the last date it was updated. If not a recent date, try clicking on install and update.

Had the same problem - my first A40 stopped charging after 2 months and after sending it back to John Lewis under warranty they replaced the charging port, factory reset and returned the phone. My first charge worked and then after reinstalling my apps it wouldn't charge leading me to believe it was a software issue.

I got a replacement phone which worked fine until I reinstalled the Garmin app which I thought was maybe the problem. Removed that and still get periodic problems with charging - tonight being an example! Pretty sure it's a software problem rather than a faulty charging port, etc.

Same here, I've tried every possible workaround on the web. In my case it is certainly a physical issue. Due to the poor construction of this phone, it seems that the back case which is very very very thin and cheap is causing the MAIN connector cable to move from its socket. This basically disconnects the SUB board from MAIN board, causing the issue. 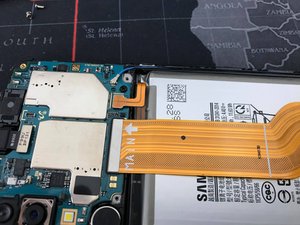 I've opened up the phone and tried various methods to fix this. There is no bulletproof solution as the back-plate which is supposed to keep it in place is very very cheap constructed and bends like butter.

In my case, pressing relatively hard behind the phone (just below the Fingerprint sensor (On Spot on the SAMSUNG logo) makes the phone charge randomly. That is the place where the plug of MAIN connector cable is located.

I hope this helps, I don't know if I will ever invest in a samsung phone ever again. This is the second one randomly dropping down on me, funny stuff after an S9 display simply failed. I had to mention that my iPhone 5s is still fully functional with an almost dead battery after almost 7 years

Thank you so much! You are amazing and you just fixed my problem on my phone. Even as a 12 year-old tech savvy kid I couldn't find the problem.

I dont understand the other comments but @psecto 's suggestion to solve the A40 charging problem is worth gold. I dropped my phone and then it stopped charging hough there is no visible damage. I pushed on the backside right on the Samsung logo a couple of times - quite hard, indeed you feel the backcover denting - and it started charging! Thx! Harro

Well today we're opening the phone - or trying to.

My girlfriends A40 also stopped charging today, after we took a hike in the rain, so initially, I though that moisture ingress might have been the culprit. After pressing down on the Samsung logo on the back, it's charging again! Thanks so much for your suggestion!

Thanks so much! This happened to me when I fell off my bike, onto my phone. It seemed undamaged, but last night when I hooked it up it wouldn't charge.

This instantly fixed my problem, you saved me the trip to the shop, and them probably wiping my data.

This is great! Finally a real solution! Thanks.

I have a Samsung A40. After some months it wouldn’t charge via its Brick (2A Samsung Brick/transformer). It would only charge by USB on my PC. Later i found it would also charge from an Alcatel 2A Brick and an Alcatel 1A Brick. It soes not charge using my XIAOMI 3A brick.

Using the AccuBattery app, it seems that the Alcatel 2A Brick produces 1.7A. I tested the 2A Samsung Brick on my XIAOMI and it produces 2.1A. It seems that the Samsung A40 will charge if i use a power source that produces less than 2A.

Hope that this helps.

I had an older Samsung charger of 1A, and now it is loading again! You made my day! It indeed seems the charging stops if the power source is too powerfull.

An interesting workaround, but sounds like a fault if it worked before. Have you checked the "fast charge" setting in device? Also try different cables to see if they were damaged. Not all cables are ok for higher amps.

The charging I think is "negotiated" each time, so if the phone is ok with 1A, the fast charger should just fallback to lower power. Disabling fast charging might be another workaround to see if that makes the phone accept the 3A charger (although slowly charging 1A or so).

An explanation might be that the charging is too unreliable, and device turns off charging entirely. As mentioned in other comments, there may be glitchy connectors and that's more sensitive in fast charge mode. The similar reason to refuse charging is if the device becomes too hot, which is of course more likely with higher power. In both cases I would however hope that there's a notification about it.

Finally charger brick may be faulty, e.g. dropping power when becoming warm. Did you try it with other device?

If the phone is QC capable, then a QC compatible charger must be used to take advantage of the fast charge of QC.

Samsung A40 charging problem is from:

Hey i have this problem too every now and then. And i tried everything like software updates and bying new cable, but ofc nothing of that worked. But i later dropped it (from 30cm height ca) by accident and after that it charges again. So i have fix the problem with both my brothers and my phone, by gently hitting (not destroy it) 3-5 on the back where the charging port/battery is located, cause it seems to be a cable in there that has loose contact or something.

Idk of it helps you guys, but it might be an option :)