xbox one doesnt turn on. NO beep sound

My xbox won’t turn on. This might be a bit of a ramble listing all the things I’ve tried so far, technical question at the end if you want to skip.

Here’s what happend. After a bad update the xbox completely shut off, it used to do a beep when pressing the button and the power brick light was solid orange.

I was told by Microsoft support to do an offline update downloading OSU1 file from their web and instaling from an usb drive, it got stuck on a loop after this, I left it on for that night but the next morning the console was off. After this it was completely unresponsive, no beep or light when trying it power it on, as if it were unplugged. Power brick light still solid orange.

Tried swapping the power supply and power ciclying but no results.

Now with some help we disassembled the console and did a clean install of the hdd using a pc following a youtube tutorial on Andrew Paul’s channel. No fix.

Now on to the question, a friend tested some capacitors and got 0.5v on some and 0.2v on others. Does anyone knows if that is normal or what should it be? I’m attaching an image

The 0.2v ones (yellow in picture) have the following text

The 0.5v ones (red in picture) the following 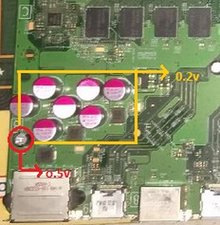