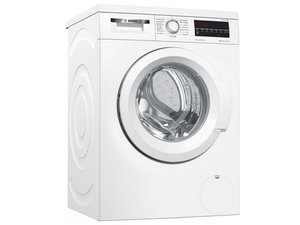 Guides and repair information for washing machines produced by Bosch, a German engineering and technology company.

Why does my Bosch Front Loader Only Rotate A Few Times

Old machine (2001), but has been super-reliable until now (only had to change carbon brushes twice)! I’ve grown attached to it (yes!) and I want to fix it!

Okay, several months ago there was a high-pitched squeal for a while when the machine was on spin. Anyway, before I got the time to have a look at it, it seized up one day while washing. Wife called me into the laundry - I turned it off and then had a look. Checked the metal bowl - no play at all there, so not the drum bearings which I had expected. Checked the motor next (6 pin motor + earth pin) - the rear bearing had failed (some metal shards underneath) - the universal motor shaft had seized-up and that’s why it stopped turning.

So, removed motor and took it to a local bearings shop - new quality rear and front bearings fitted to the motor for a modest fee. Outwardly, the electric motor appeared to be in very good condition (no blackened/burnt areas on armature, commutator or windings as far as I could see - no visible signs of any issues really. Remember though, the motor had been seized with power going to it for maybe 30s - 1 min before I turned it off. For good measure I also put a new set of carbon brushes in the motor (although old brushes were still 2cm/1inch long). I also took the opportunity to remove and thorougly clean out the filter on the outlet of the drain pump before assembling everything again.

Time to check! Put some washing in and turned it on to wash. Status light moved to Active (from Ready status) and the water inlet solenoid clicked and water came into the machine! So far, so good! Then tub spun, but only for 1-2 seconds (tub maybe did 2-4 revolutions) and then came to a stop. A minute or so later it did the same thing, and so on, and so on. The same thing happens in the rinse mode and the spin mode - starts okay, but then stops, only to keep doing the same thing. The status light remains on Active all the time, it’s just that the motor has a little flurry, stops for a while and then goes again later - but doesn’t KEEP turning as it should. Tried it with the old carbon brushes back in, but exactly the same thing.

What could it be? Some other damage to the motor, or something else perhaps has failed after the motor seized up? It has an emf suppression capacitor, but it looks okay and someone told me they very rarely go bad.

Maybe I should buy a second-hand motor and give it a go?