Powers On but No functions after Battery Replacement

A Friend and I replaced the Battery in My Macbook since it recently gone bad and started swelling up.

The last time I turned on the macbook with the old battery, the keyboard was seemingly functional (based on the caps lock key light working), but the display would not come on, the touchbar would not display anything. I never tried if the sound worked. The bottom was very hot to the touch.

Now, with the new battery installed, the computer powers on (with it open, we can see the fans spinning, and the CPU gets hot) and it seemingly activates the trackpad too (as its clickable). But nothing else works. No display, no touchbar display, no keyboard. Although the touchbar doesn’t work (I would guess the fingerprint sensor doesn’t either), the power button does work completely fine. Not sure if the IFIXIT Battery comes with power in it (lol) but seemingly the thunderbolt/usbc ports work as the charger did. The bottom gets a little warm as it might normally.

Anyone have any ideas as to what the issue could be here? We did use the “remove the logicboard” method (only afterwards I found out you could change the battery without removing it), so maybe something was damaged or misplaced, but we were sure to review the reinstallation to see if anything was out of the ordinary. I’ll include photos of the logicboard in case anyone sees something that we might’ve glossed over.

I see some kind of white residue on the left side of the motherboard near the CD3215 USB-C Controller IC and also the USB-C port flex. When the computer turns on are you getting a trackpad click, caps lock light or when you press the power button a bunch of times are you getting a “voiceover on or off” message? This will be hard to diagnose because this problem can be caused by a number of different things.

Do you have a USB-C Amp meter? I would start by taking readings with a USB-C amp meter, that will tell us if its charging properly and booting. Check the white residue and make sure its not liquid damage. Liquid damage on the CD3215 will mean you need a logic board repair since one bad CD3215 will not allow the board to charge or boot properly. Liquid damage on the USB-C port flex connector almost always shorts out the board making it not power up properly. It sounds like you had an issue even before replacing the battery. Black screen even though the computer is on and you were getting caps lock light which could potentially be a flexgate issue with the screen or broken LCD.

EDIT: I just noticed there is a component that has been ripped off the motherboard. See the attached image. This component is U5850 Thermal sensor and will cause a fan issue. Im sorry to say but you will likely need serious logic board repair to get this macbook to work again. 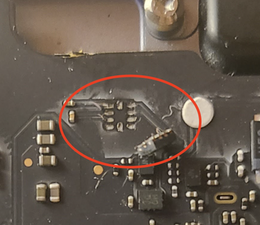 Agree to much of this.

I'm not sure the white residue is liquid damage, especially if fan spin is present. It looks more consistent with boards in devices that are used by people who vape in front of their device (no judgement, just it's something I have seen before, residue from this tends to collect is recesses in the board). But I would still clean that off with isopropyl alcohol.

USB C ammeter would definitely give a better idea of what the machine is doing; if it's actually booting and you're just not getting display, or something else.

I would try to connect to an external monitor. If you have FileVault enabled, and the disk is locked, you wouldn't get anything on the touchbar until it you logged in, even if the touchbar was working 100% correctly. If you can get display out, then you can check other functions more effectively.

Hmm the white residue one is an interesting case because I've never spilled anything on this. But upon first opening it, my friend did point out that it might be an abnormality.

I did plug it into an external display, and still got nothing.