iPhone turns off as soon as I put the back cover on.

I work as a repair tech at a cell phone repair store. And this is something i've never seen as long as i've been working in the business.

An iPhone 4 CDMA came in for a screen and back cover replacement. So we did the repair and the phone worked fine. The customer came back in about a week later saying the phone wont turn on. It ONLY turns on when it's plugged in to the wall. So naturally I decide to swap the battery, and it still doesn't work. So I try more batteries, and none of them are working. I got fed up with putting the back on so many times I decided to try the rest of the batteries with the back off. The first battery worked, so I said OK. I went to go put the back on, and as soon as I put it on the phone died.

Then I took the back off and the phone powered up again, (powering it on with the button).

Also, with the phone back off and the phone working, it does all sorts of things. The battery percentage is extremely imprecise. Jumping from 32%, to 47%, and to 100%, and to 0%. I know it's not a battery issue as i've tried about 20 batteries. Does anyone think it could be the charge port? Or some kind of chip on the mobo that reads the battery's percentage?

I've never seen this before in my life and I need help, I can't find anyone else on the internet that this has happened to. I don't quite like having to refund people their money, and neither does my employer.

I took in a phone today that was in factory condition with no previous repair work performed it was doing the exact same thing i found that the black sticker that covers the phillips screw and grounding clip located under the camera was missing. I removed the camera applied a new sticker and the problem was solved.

This worked for me 100%. Quick and easy. The screw cannot touch the gold area underneath the flash component of the rear facing camera assembly. THANKS!

I concur about the black tape over the screw beside the camera. This tape must be pulled back to remove the logic board to replace a screen and often is left off or rolled back. It really needs to be put back in place or else that screw can cause a ground which shuts the phone down completely.

I have solved this, it is the rear camera. Check your installation. Confirm by pressing around the digitizer flex with the phone on. If it turns off, you know where the problem is. I'm not exactly sure what causes it but I just fiddled with the camera seating and that fixed it.

i have the same issue. no idea what to do here?

Removed grounding clip up by the Flex cables.

Removed grounding clip next to battery.

No idea what to do here.

Some help me! lol.

ive narrowed it down to the UPPER grounding clip by the Flex cables.

ive placed electrical tape around it, and put the back on, and it worked.

if you slide the back on with a lot of force, it will cut thru the tape, and short out and shut off again.

Not sure what is causing this, but this is the only "work around" i have found, and im am unsure exactly what this grounding clip is grounding.

Same problem here, did have waterdamage

I've just solved such a problem on my iPhone 4. The key worked for me was to stick a transparent tape on the whole back of the back cover, but the little connector.This is being done so it prevents from closing any electrical circuits or so. This worked immediately for me.

It got me though crazy for a while ...

I hope this will help you.

Btw, it is a great forum!

Are you sure that the batteryconnector one the motherboard intact

Look if the soldering is okay: 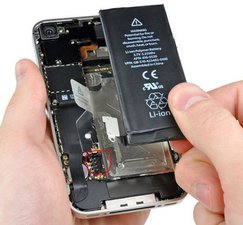 The battery connector is still soldered perfectly to the motherboard. No issues in the solder as far as I can see, under microscope and magnifying glass.

It's the weirdest thing i've ever seen come into the shop. Phone works fine with the back cover slid up about half a millimeter. But as soon as I tighten bottom screws, boom, shuts off, and with the back fully on, it'll boot up only if it's plugged in. To tell me that the battery is at 100%. When I know for a fact it's at or around 60%

Okay.. Just to rule out the possibilities of the problem: Can the clip next to the batteryconnector on the motherboard be the issue? (Don't know what it called :P the one that connect the back cover and the motherboard, "metal to metal")

I'm not an expert but just trying to think out loud ;)

Water damage is a whole nother game play. Could be anything. Try putting it (the entire device) into a glass of 99% isopropyl (alcohol)

Anything less will conduct electricity and short circuit the device.

That's all I know to do that actually cleans and prevents corrosion. But what damage is done already, is done. Bag of rice only helps draw moisture out. Not prevent corrosion.

Try to do what I posted before about the electrical tape and let me know how it goes!

I had the same frustrating problem a few weeks ago. After a few hours of fiddling with the back cover and trying some software resets to no avail, I rechecked that all of the various flex connectors were securely in place and swapped the back out with one on another phone and it worked fine. I'm not sure what fixed it, but I have a hunch that the the standoff screw that the battery connector screws into might have been too lose so that the battery connector didn't fit all the way into place (leaving the connector high enough off of its socket to be affected by the back cover).

After reading this forum and the solutions you guys came up with, I went and tried something a lot simpler on my phone which is exhibiting the same problems. I found that pushing down around the camera caused it to turn off...and sliding the back cover on would be pushing this camera hardware down towards the bottom of the phone...so I got a tiny piece of paper, folded it up so it could fit right under the camera lens and prevent it from moving, and bam! problem is solved. Cover went on a bit more snugly than usual, but it works like it's supposed to now. Saved a lot of time for someone like me who doesn't quite wish to take a stroll down "take the whole phone apart" road.

I done what Pavel ^^ did and put some strips of tape on the inside of the cover and it worked straight away. Suppose I could have tried the tape in sections to see where about the contact was causing the problem but it had wound me up too much that the fix was that simple I just left it.

Some people mentioned the black tape on the screw under the camera but thats for the iphone 4s.

Thanks I had same problem drove me nuts I also btok a piece of white tape ontop of back cover it now works fine thanks:)

I had this problem as well and just put a piece of clear tape on the WHOLE inside back cover. Worked like a charm!