Possible SMC damage from liquid spill - needs a logic board?

My neighbor asked me to see what I could do with a MacBook Air, model A1369 EMC 2392. I believe it was purchased in late 2010 or early 2011. It has had water spilled on the keyboard. They dried it out but it did not seem to want to boot up. I took it apart, disconnected most of the cables, and reconnected them to hopefully refresh those connections.

After working with it for a while I decided to try pointing a flashlight at the screen, and I determined that it had no backlight. Apparently this model has an LED backlight. I can use the system if I connect to an external monitor. However, it seems to want to go to sleep almost immediately as if the screen was in the closed position. I can keep it going by constantly moving my finger on the touchpad.

After reading lots of good information on this web site, I have reset the System Management Controller (SMC) and the PRAM. The resets seemed to take okay but the symptoms have not improved.

I am now thinking that the SMC circuits could have been damaged by the liquid spill. This is the first time I have ever cracked open any type of Mac so my experience is very limited and any advice is welcome. If the SMC is damaged, I have no idea if it could be replaced or if the entire logic board would have to be swapped out. Does this system need a logic board?

Edit on 7/7/13: I have attempted to add a shot of the system with the back cover removed. I will take closeups of the connectors that could be problems. 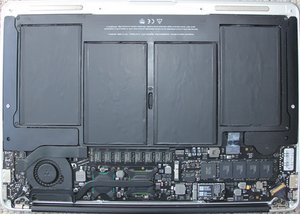 Okay, it took me a while to get even halfway decent closeups after some business travel. I have never done much macro photography and certainly never tried to shoot anything like a circuit board. I have marked one of the most corroded areas in this shot. 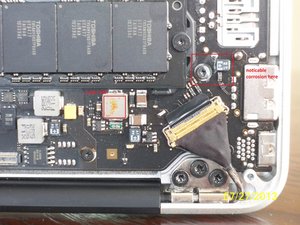 Here are a couple more closeups. Can anyone mark the connector is for the cover sensor? 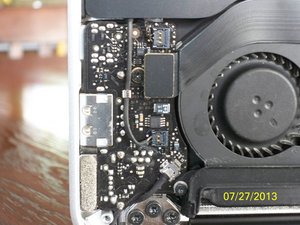 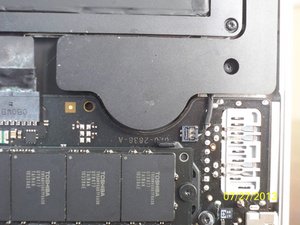 Can you give us the last three digits of the systems serial number so we can identify which model you have.

Often when liquids are spilled they can leave traces which can sort or corrode things. When you opened the system do you see any spots where the spill was? Also, what exactly was spilled as that can help in what will be needed to clean things up. Yes, something could be damaged and may need replacing but until you locate the areas effected by the spillage it will be tough to isolate what needs replacing with so little to go on. If you can take some pictures the more detailed the better. Took soon to tell if the logic board needs replacing.

oldturkey03, thank you for looking up the specs. It looks like you are on the right track. I have misplaced my "Mini DisplayPort to HDMI" adapter. I will boot the system and confirm the specifications after I find that device. It is pretty much impossible to run the computer without going to an external monitor since the backlight is not working.

dlsnook, you are welcome. I hope we can help you further once we see what you are up against.

The blue is corrosion! What was spilled into the system?

You'll need to disconnect the battery and then using distilled water (not tap!), wipe the areas down removing as much as you can with Q-Tips making sure not to snag anything. In this case you'll likely need an acid to clean off the copper oxide. Use white vinegar and then go over the area a few times with the distilled water to neutralize the acid. Once you have gone over the logic board (both sides) wipe down the areas again with a good quality of isopropyl alcohol (reagent being the best). This will remove any oil residues and help in drying the water out. Let the board fully dry (give it a good day sitting in a sunny window).

If you still have problems with the clean up post some pictures of the areas you are having problems or questions. Good Luck!

Yes, I agree that the blue residue is corrosion. There was very small amounts near a couple connectors but the contacts themselves looked okay to my inexperienced eyes. Of course I can't see inside the female connectors. The story was that the spill was a glass of water but I can't swear to it - I am getting the story from my neighbor, the owner. Thank you very much for the expert advice, will give the cleanup a try.

dlsnook, it is very difficult to determine failed components by looking at them. Post some images of the parts in question and lets see if we can help you. To add images to your question, check this guide Adding images to an existing answer

oldturkey03, I will get some good closeups and post them. Thank you very much for the suggestions and the link.

The smc must be in a good condition. It is a CPU too, any fried circuit in the SMC will always render it entirely inoperable.

The sleep/ wake sensor is in the I/O mini board. Check for any damage. Shorted/fried circuits on the logic board can also affect sensor data feed

Thank you very much for your reply Tom. The Apple hardware test shows no issues so it makes sense that the SMC is still operable. I thought maybe some I/O circuits were damaged on the SMC.

I don't know if you requested this but the last 3 digits of the serial number are DR1. I thought the model number (A1369) was the important thing. :-)

When I opened the system there was some light blue residue on or near one or two connectors. I was told the liquid was water and I see no evidence to indicate that it was anything else.

I have a picture and can take more pictures. It is not clear to me how to upload the pictures on this site.

Well that is an interesting coincidence Tom. I'm sure you know your own machine very well so it seems that you are the right guy to provide advice to me! :-)

disnook - The SMC communicates to the battery. The area which your image shows has some corrosion is the battery connector which can explain why the SMC is having problems. Please post the better pictures oldturkey asked for so we can figure out what you'll need to do to clean and fix your system.

battery connector is obviously corroded. but since you can use the machine when connected to an external display, i think battery should not be the primary problem.

Mac notebooks will not go into sleep mode even with the lid closed if external display is connected. so my theory is that liquid damage caused the lid sensor or signal/power trace for the sensor to malfunction. so the SMC always receive lid closed signal and put the machine to sleep if no external display is present to alter this behavior. The lid sensor is on the mini board. check the other side of the board for corrosion and try to replace flex cable over the fan or the mini board next to the fan

I repairing these systems. If the SMC was bad you would not even get a green light on the magsafe. You'll need a schematic diagram and the boardview (.brd) file to find the part location. You may need to clean the board and possibly have a shorted backlight fuse (Backlight issue). If the battery doesn't charge (green light) the issue is possibly the Intersil ISL6259A (CSI/CSO) or the diode connecting the adapter to the Intersil.

I also have a macbook air A1369, just got water spill on keyboard a few days ago, I tried to dry it with hair dryer mostly with cold air and put it upside down. Machine turns on but battery is at one percent, the led indicator light remains green at all the time but doesn't charge the battery anymore, if i unplug it the machine dies. :( ..... Can you help? I ordered the P5 screwdriver to open it soon. I've been researching since then and your comments in here called my attention, " If the battery doesn't charge (green light) the issue is possibly the Intersil ISL6259A (CSI/CSO) or the diode connecting the adapter to the Intersil."

I saw other posts where they recommend to remove mother board and give it a bath of alcohol and then let it dry. I'm not sure about that one and don't want to break it more than it is. Thanks!