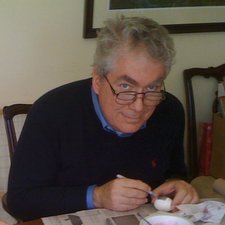 Is a Blue Screen at Start-up a Hard Drive Problem?

I came back to my Powerbook after a power failure and the screen was all light blue. I restarted, getting the appropriate chime, but it only got to the point where it displayed the light blue screen again and did nothing more -- no sad face, no question mark.

…restart after NV PRAM reset (Cmd-Opt-P-R). Start-up chime and restart, but then the same result as before.

…boot from Mac OS X on an external Firewire disk. Succeeded, but internal HD did not mount.

…inspect the internal HD with Disk Utility. Disk appeared, but would not mount.

…run Repair Disk on the internal HD. Test began but failed after reporting working on catalog.

…run DiskWarrior to recreate the disk directory. The process took several hours due to reported hardware malfunctions and completed with a report of 0 directories and 0 files in the "rebuilt" directory.

I am considering removing the existing internal hard drive and replacing it with a new drive, and placing the old drive in an external HD enclosure and testing it there. My questions, then, are:

1. What else might you recommend i do to solve the problem without removing the internal drive?

2. Is it possible this could be a logic board problem? The fact that DiskWarrior detected no directories or files whatsoever, even though it saw the drive present, signals that the drive may not be communicating through the logic board at all. How might I further isolate the problem to either the board or the drive?

3. What external enclosure would you recommend for the internal drive if I remove it?

4. If it is the hard drive that has gone bad, what data recovery service(s) might you recommend?

Thanks very much for considering this problem.

As the internal HDD of a PowerBook is easy to swap, i'd try a different drive and hope that the data on the old drive is still readable when attached via USB.

Thank you very much for your thoughts and advice.

Is there an external enclosure you would recommend I use for the drive I remove from the Powerbook?

Enclosures for 2,5" IDE drives should be available at any good stocked electronics shop. Alternatively you could use a simple adapter such as http://www.newertech.com/products/usb2_a....

Thank you yet again for your recommendation. That looks like a very versatile tool!

The electrical surge may have caused damage to the hard drives boot blocks. The only way I know to fix this is to reformat the drives and write zero's to it (one of the format options). This will map out any bad blocks. If it were me I'd replace the drive and religate this one as a non-critical storage device.

Thank you very much for your thoughts and advice.

Is there an external enclosure you would recommend I use for the drive I remove from the Powerbook?