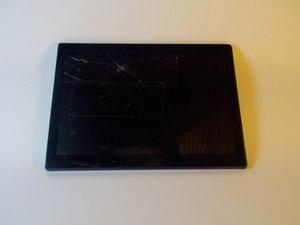 Why is my touch screen unresponsive

When I try to do anything on my tablet using the touch screen it doesn't work, but the mouse and the keyboard work fine, just not the screen. How do I fix it ? So that when I touch the screen it works?

The digitizer (touchscreen) in the tablet either has a loose connection or is faulty.

Here is a link to the ifixit guide(s) to repair the tablet.

They are useful in that they'll help you to open the tablet to check the digitizer connection and also to gain access to the digitizer itself if you have to replace it.

Here is a link to just one supplier of a digitizer. It is not a recommendation to use them, it is shown to give an idea of the cost of the part. There are other suppliers that may suit you better. Just search for NuVision TM1088 digitizer part for results.

Hopefully this is of some help

A couple of things could have happened. You dropped the device, thus breaking the digitizer which is the part of the device that registers touch, which means to fix it you must replace that part. Simply google your Tablet and "digitizer replacement" after and you can find several sources that will sell it for you and allow you to repair it yourself.

Another option is less likely which is the touch never worked at all. In which case it is what is called "defective" and should be covered under warranty provided it hasn't been ages since buying the device.

Moving on you could have dropped or hit the device just hard enough to unplug or jar the connector on the digitizer which would stop registering your touch.

If no damage has occurred and you never dropped the device, or loaned it to someone who may have dropped it, your best bet is to contact a repair store or the manufacturer themselves. Contacting the manufactures could be more expensive than a repair shop but you will get a new warranty and most of the time, phone support. However if damage has occurred then this is more likely a digitizer problem rather then a defective device. In which case you are not covered under regular warranties and would need to pay out of pocket to have it fixed.

Your biggest issue is finding out what caused the issue. As stated before if no damage was done, then send the device back because you are covered, however if this issue is because of your own doing, then you will need to repair the digitizer. Which can be done yourself or via repair shop.

Thanks to @Jayeff here is a link to the guide for your tablet. As stated it will allow you to take apart and diagnose the issue with the tablet. Either a simple loose connection, or replacing the digitizer the guide will solve your issue.

Just to add to the answer, here is a link to the ifixit guide to repair the tablet.

Thank you for improving that! I will make sure to add your link in the main post just so it stands out more. Thank you again.

@mfsabrii , Sabrina, You may have to try a factory reset, as a corrupt App/software may be causing the issue. To reset the device, press the power button and the volume down button and hold both of them for 10 seconds. Once the tablet turns on it enters the Reboot screen. Scroll down to “Wipe Data/Reset”. Factory reset will remove all data!

If this does not fix the issue then it could be a bad digitizer and may need replaced or the connections checked and reseated. Link #1 is a replacement digitizer and the 2nd link shows the replacement process. Good luck. I hope this helped you out, if so let me know by pressing the helpful button.