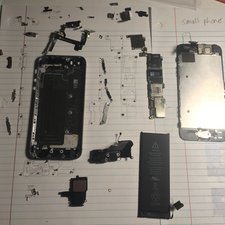 How to fix fingerprint scanner/home button no longer working?

Just earlier today, my fingerprint scanner began to behave the same way, only working every 5th try or so. Then it completely ceased to function.

I can easily restore the button function by replacing the home button, but is there anyway to restore the fingerprint scanner without going through apple?

I had the same thing happen but the print reader has failed to work. Can someone help me?

Hi @trans1000. There is no way to replace the home button and preserve Touch ID. The sensor is uniquely paired with each CPU to be secure. If your original home button is dead, so the touch ID is dead forever.

Anyway to troubleshoot the original button?

I'm Sorry, but the home button is not repairable. The only way is replace all the logic board with his original home button.

Arkcyd would be correct in saying there is no way that an end user or an independent repair shop could replace the button with functional touch ID. However Apple certainly could.

When the Apple store replaces an iPhone screen, they actually replace the entire front half of the phone: screen, front camera, sensors, earpieces, and home button. It is the Apple store that has the "magic box" Horizon machine that pairs new home buttons to iPhone motherboards. So if you want a 100% fix for your home button you can pay Apple their standard screen repair price and they will get it done.

Alternatively you could buy a home button from third party for less than 10% of that price and swap in in yourself. That's only if you care more about cost savings than usable touch ID.

I'm stuck on the black screen of death everytime I lock my phone. I tried the forced restarting which works to bring the screen on and get back in but when I lock it again I'm back at square1. The only way for the lock screen to glow so I can swipe up and put in my code is when I force restart it, EVERYTIME, even though the phone is still on… I have a samsung a20 and it has no home button and you cannot take out the battery. My biometrics scanner is not working once I lock my phone and neither are my volumeup&down and lock keys(unless I wanna force restart, WEIRD I KNOW). Ive been “googling” all day and I cant find answer for this problem. CAN ANYONE HELP?