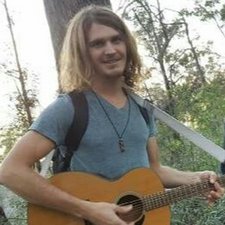 Here's whats going on, I have a Zoom TAC-2 Thunderbolt Audio interface which I've been using for sometime with another macbook pro 17" and it had no problems on a macbook air either..

Just today I tried the interface on two different 17-inch macbook pros of mine (one running High Sierra the other is El Capitan and it appears to get no power from either of them. At this stage I was thinking okay this has to be either the thunderbolt cable or the Interface has died on me somehow. First I hooked one computer to the other in target disk mode to test the cable, no trouble getting target disk to do it's thing, but I went ahead and bought a genuine apple cable anyway just to be sure, still no signs of life from the interface.

Finally in a "there is no way this is going to work but what the heck" moment I tried hooking it up to my brothers same 2011 model macbook pro 17 and voilà, it does its usual LED streak up light. This made me happy but it still leaves a lot of questions about my 2 macbook pros and their thunderbolt ports.

Is it possible they're not providing power through the correct pins? The pins look clean to me so I don't see any obvious issue and the fact it works for target disk mode also seems strange. Anyone have any ideas of what to try or similar experiences not getting power from their thunderbolt ports? Could this be software even? 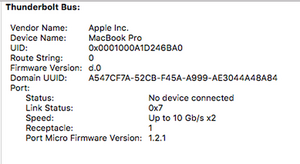 DAN! Okay I found out what the problem is, you're going to want to make a note of this as it will be helpful to others.

Firstly, I stumbled across this which provided clues https://discussions.apple.com/thread/787...

Unfortunately the correct firmware cannot be installed from any of the later versions of OS X (not sure from when, but presuming Yosemite?) so after a late night and a lot of mucking around I managed to get Mountain Lion 10.8.5 installed onto a spare toshiba drive I had, for some reason I couldn't install from an external caddy either so had to mount the drive internally. I also ran into an an error regarding installing from usb "There was a problem installing “Mac OS X”. Try Reinstalling". Considering how much time it took me I'm very relieved that my hunch was correct!

Now I just have to switch back to my SSD and go from there but at least I can see it's powering up now :)

Note to anyone reading this: Make sure you're plugged into AC power or the firmware update won't work (quite possibly why it didn't automatically update the first time around back in the day!). Also, take your time and breathe ;)

Good discovery! Happy it all worked out.

Haven't encountered this problem so good to know.

Yes this was VERY helpful...oh my goodness YES. I was trying to help a friend with my diagnostic external SSD's (where I have ever system ever made w/like DiskWarrior and etc ...and it was killing me to be 10 1/2 slower over FireWire 800. This did the trick...now my good deed is NO longer being punished. ;-) :-p As I have one external that has all my diagnostics with ThunderBolt 2 and SSD. REALLY THANK YOU SO MUCH!!!

Thank you! I have had the same old d.0 Thunderbolt firmware and didn't know that it hadn't been updated automatically. This was really a nightmare because I couldn't use a Thunderbolt 2 dock (Akitio and CalDigit). Only the Belkin Thunderbolt 1 dock worked. I had to return the docks, because even Apple support wasn't able to point me to a solution.

Other than in your experience, on my MBP the Thunderbolt Firmware Update v1.0 was installed in MacOS 10.12 Sierra. But in order to be able to install the 1.2 update, I had to boot from a MacOS 10.9 Mavericks backup . In the end, I got the Thunderbolt firmware 22,1 and the Port-Micro Firmware 2.1.3 .

As it seems Apple has rolled out later Firmwares inside MacOS updates. No Thunderbolt update has ever reached my Mac, that's why I had to install it manually. So it might be possible, that there is even a more recent version.

Now I am curious to find out if anybody has a newer version installed on his or her Mac? And what do I probably have to do to get it?

Double check to make sure your ports are indeed Thunderbolt.

The older MacBook Pro's had mini DisplayPort which looks the same! The port needs to have a lightning bolt next to it. As an example, the 2009 & 2010 models have a DP port, both 2011 models have Thunderbolt.

These are definitely both 2011 models and I can confirm both have the lightning bolt beside the port. Any other suggestions Dan? - Thanks

If that's the case your logic board will need repair or replacement.

The 17" models are highly sought so I would make the investment to get it fixed one way or another.

You may need to check your cables as its possible one is damaged which in turn damaged your system.

Also, make sure you watch your AC power! Peripheral devices need to be powered from the same common outlet and ideally via a surge suppressor or UPS. Lightning, as well as power surges, can damage things in very odd ways.

Thanks for the advice, is there a safe way to test the cable d'you know? It's possible the cable affected both machines I suppose! Noted on the power.. Did think the firmware looks odd though, it's saying "Port Micro Firmware Version: 1.2.1", shouldn't it be 2.0.7?

Don't have any tricks in testing the cables. Thunderbolt cables are tricky! Unlike a normal cable, the connector end of the cable has a buffering chip! Here's a good write-up on port: Thunderbolt 1,2 & 3. using a very fine probe (pushpin needle) you might be able to test the port power line or if you're bold cut a cable to gain access to the discrete wires and trace them out so you can make a test cable. The link offers the pinouts.

Sadly, I don't have my 17" with me (late 2011) so I can't tell you if mine is any different on the ports micro firmware. I'm not sure this is even changeable, as I think it's within the front-end port chip, not the controller. It wouldn't surprise me if the early and late models have different versions.

Both the machines I had the issue with are early 2011 2.2ghz models, although I'm not sure if that was the cause, could it have been that when the firmware was supposed to auto update that AC power was not provided causing these updates to be skipped? That's my best guess anyway, I haven't owned either of them since new so it seems possible previous updates were neglected and for whatever reason apple hadn't incorporated a compatible update into any newer OS X. Either way it's a huge problem but I don't know if apple would address it? I'll definitely be writing too ZOOM however, I'm sure apple would take them seriously about this..

I did everything to the letter but the darn firmware updates refuse to run. Anyone?

Thank you. I have had the same problem and solved it thanks to your tip. More info in my comment under your solution. Is Thunderbolt firmware 22,1 and Port Micro-Firmware 2.1.3 the most recent version for this Mac?

Do you have any other clue how to update that micro firmware?

It turns out my newer laptop, despite having an identical model# to my older laptop, has a slightly different quirk. The “newer” one’s DVI port does not double as a Thunderbolt like my older one. No amount of firmware updates will enable this function. I blew a bunch of money for the wrong device completely.