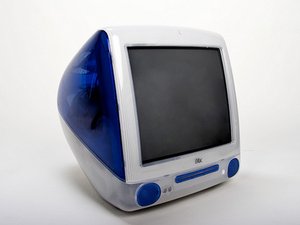 Having troubles with the G3

So recently I got my hands on a IMac G3, and I’ve been having problems with it turning on. To explain, whenever I hit the power button wither on the keyboard or computer itself, the crt makes the sound of a static discharge/piping sound, and the power light comes on and the edges of the screen light up ever so slightly. However right after turning it on, it immediately powers off, and if I try turning it on again shortly after. the crt makes a sound that’s comparable to a sqeek and powers off almost immediately. I did however replace the pram battery, but the computer is still doing the same things it was doing with the old pram battery. So I was hoping if someone could help pinpoint the problem or if my computer is long gone.

The first thing I would do is replace the 1/2 AA 3.6 volt lithium PRAM battery. It is located on the logic board. See step #10 of this guide: iMac G3 Model M4984 Hard Drive Replacement

There is no guide for your M5521 model but these machines are almost identical except for the processors.

I have already replaced the battery, but it's still doing the same thing. Are there multiple batteries in the M5521 model? Or could I have placed it in wrong?

The battery cage usually has a + and - sign in it.