Noisy blowing fan / one missing connector (which one?)

After reassembling the system the fans started making a lot of noise. After taking off the screen again, I noticed that there is one connector missing. It is not attached to the mainboard. Before I start taking the mainboard out, I want to know which connector is missing. I have a picture of the board and where the connector should be. (See picture with circle mark on the connector). 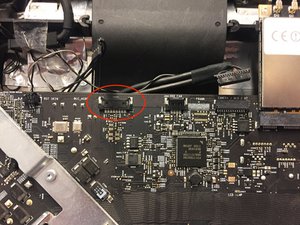 Please let me know if you know what connector this is and where the fitting cable should be.

You certainly have an eagle’s eye Steve!

So, you were right about that two-wire connector, of which the white wire was disconnected. I solved that by pushing it in again and squeeze it for contact by pushing a thin needle alongside.

Restarting the system did not solve the fan issue. It started blowing again at high speed within 20 or 30 seconds after power up.

What I also noticed is that the black flat cable (see picture) connecting the screen to the main PCB is damaged on the connector that goes into the connector holder on the main PCB. I think I have to replace that. 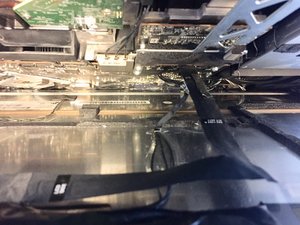 1) Could that damaged flat cable cause the fans to run at high speed?

Did you replace the original Apple hard drive?

@Steve: thanks for the tip. I will check that.

@Mayer: I did not replace the hard drive. I did take out the video board as it caused vertical lines on the screen. I has been baked in an over for the resolder effect. That worked perfect. The system functions well, the screen is perfect againg. It’s only the fan now.

That is a diagnostic connector and is not your problem.

Using your picture as reference, look closely at the two-wire connector to the left of your red circle (to the immediate left of "RGT SKIN" on the motherboard). That's your thermal sensor, and if you look closely you'll see that the white wire has been partially pushed out of the connector which means your computer isn't getting a reading from that sensor and as a failsafe has put the fans on at full speed. Unplug the connector, carefully slide the wire back into place, plug it back in, and your problem should go away.

1. No, the damaged flat cable would not cause your issue. That cable carries only the video signal. If that cable were damaged you would have video issues or perhaps a startup problem.

2. That one remains empty. As I said, it's a diagnostic connector. If you bring your iMac to Apple they will plug a cable in there to perform diagnostic testing.

If your fans are still blowing full speed I can think of four possibilities:

A. The thermal wire assembly is damaged/not seated correctly.

B. The motherboard, hard drive, or SATA data cable is damaged.

C. The SMC needs to be reset.

D. You've got a non-Apple hard drive in there. In 2009 Apple moved to an internal thermal sensor on the hard drive. If you replace the drive with a non-Apple drive, the fans will run at full speed. The easiest fix for this is to install a utility that adjusts fan speed based on the SMART temperature sensor. There are several out there and I'm using one at home; I don't remember which one but I'll check it tonight when I get home.