Battery not Charging, computer turns off when unplugged

Just replaced battery with ifixit battery, followed instructions meticulously, lost nothing, broke nothing. Turned it back on with power adapter, battery shows 95% charged, but shows “Battery is Not Charging” message. Computer powers off if power adapter in unplugged, and won’t power on if power adapter is not plugged in. Overall, it seems like the computer is running slower which worries me. System seems to recognize the new battery, its info shows up in the system report. Screen shots attached. 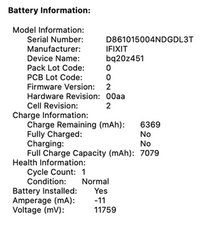 Try cleaning the battery contacts on both the battery connector cable coming from the battery itself, the logic board battery pads where that little piece that connects the battery to the board. Any brush will do, if possible do with 90-99% isopropyl alcohol with a brush or cotton swab.

No need to clean that little block piece with the pins because that has pins on it and is easy to bend if you try cleaning it.