After having replaced the battery (non-genuine from a trusted seller on eBay), my iPhone SE constantly reboots (seems like every 180s). Took a look in the crash logs and found that the phone is kernel panicking. The error message is something like „no check-ins from thermalmonitor.d since load for 180s“ followed by „missing sensor(s): TG0B“. Also, I am unable to view the battery health in the settings - it only shows a spinning wheel forever.

Unfortunately, I couldn’t find anything related to this sensor. There are some posts on iFixit regarding thermalmonitord crashes already, but other sensors (which are supposed to be related to the charging flex). I didn’t touch the charging port though.

However, I had to apply a lot of heat in order to get the original battery out (used a microwaved washing cloth) - hoping I did not melt anything else in the process.

Does anyone know what the sensor TG0B is and how to fix this? Would another battery work? The old did work before, but after having removed it it’s very bent and I would prefer not to install it again to test, so I’d have to get another battery first.

Did you manage to get it working? Have an iPad with same TG0B error...

While replacing the battery you have nudged a component next to the battery connector. If you have no experience in microsoldering you will need to take it to a reputable repairer. 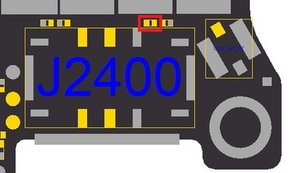 I have the same problem after having replaced the display - plus the battery now stops charging at 13%. Where exactly is the component that might be damaged? I do not see many elements next to the battery connector. What part do I need to replace in case soldering is not possible?

You probably damaged something while in the microwave.

In my case, the problem sloved by using another battery (no TG0B message anymore)