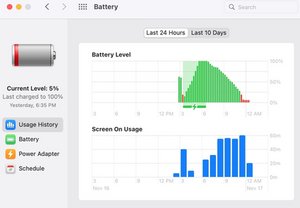 I had an old Apple battery with 1200 or so cycles that was suffering sudden reported battery percentage drops, and shut-offs from mid to low battery percentages. The above graph is a replacement iFixit battery which also suffers from drops and erratic readings. The drop above was after the computer was allowed to sleep for one day. The final readings above when running the battery all the way to computer shut-off are also erroneous: a sudden drop down to 7% and then one hour of life at 7% and 6% before total shut-off. However, you can see that the overall linear fit of the graph would be a good prediction of shut-off rather than the reported percentages.

I find this offers a bit more clarity, install this gem of an app! CoconutBattery take a snapshot of the apps main window and post it here for us to see 기존 질문에 이미지 추가하기