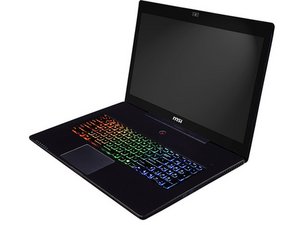 Also known as the GS70 Stealth, this 17" gaming laptop was released in summer 2013 by Micro-Star International. Identified by the model number MS-1772.

No display on device. Replaced LCD, LCD Cable, and motherboard

Any help is greatly appreciated.

The following is just a theory I have about the problem, but maybe worth looking at all the same, if only to eliminate the possibility.

With the laptop on and the laptop’s LCD screen connected to the motherboard and no external monitor connected, try shining a torch (flashlight) at an angle close to the laptop screen and check for images e.g. Windows desktop.

They will be very faint if there are there so trying in a darkened room may help to see them.

If you can see them then it is a backlight problem.

What might have happened, is that originally the backlight power supply fuse on the motherboard may have blown due to say a fault in the LCD panel or the LVDS cable (damaged where it passes through the hinge??).

If say the fault was in the LVDS cable, then changing the screen or cable wouldn't help as the fuse has already blown.

If the new motherboard was tried with the original LVDS cable first connected and not the replacement cable then the fuse may have blown on it as well so the problem is still there after changing parts after this as now both motherboards have been affected.

Check both motherboards for the location of the backlight fuse if it has one and check if it is OK with a DMM. It may be near the LVDS cable connector but maybe not. You would need the schematics to know for sure how the backlights are powered.

Did @brettpocalypse mean an Asus GL703VM-NH74 and not an MSI laptop?