Back to Help Index

The Version Control Management page can be found in the Site Explorer in your Management Console:

The Version Control Management page gives you a quick view of every guide on your site—and displays the current release status of each guide. There are three release statuses: Never Released, Unreleased Changes, and Current Release.

The example section below lists 20 guides with edits that have not been published yet. The previous version of each guide will be displayed until the edits are published.

The example section below lists 7 guides that are completely up-to-date. No unreleased changes have been made to these guides, and the viewable version of this guide is current.

Go back to the Help Index

With Version Control, changes made to a guide—whether a reworded sentence or a couple of new steps—can be grouped into an unpublished new version of the document. When you are ready for these edits to become visible to all users, simply deploy a new version of the document. In addition, Version Control also allows you to archive past versions of a guide—so you can revisit and restore previous editions of your documents, making it easy to keep careful track of your guide’s history.

Once changes on a guide are ready to be deployed, you must save this new version of the guide.

First, view the guide. At the top of the guide you will see a grey bar with a drop-down menu. This drop-down menu lists all the previous versions of a guide—and the current, unpublished version is called “Head”. To add the new version of the guide, select “Head” and then click “Publish Version”. 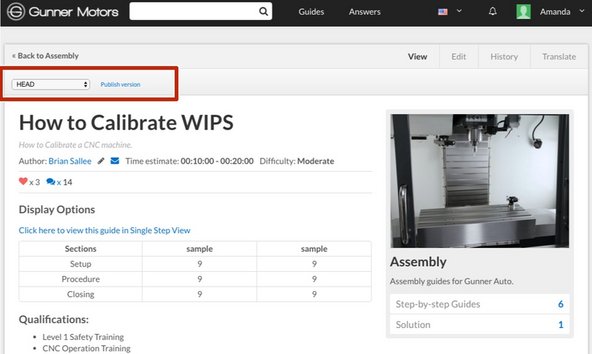 Once you click “Publish version” you will be prompted to fill out the Title, Publish Date, Release Notes, and Major/Minor Version fields to complete your deployment. 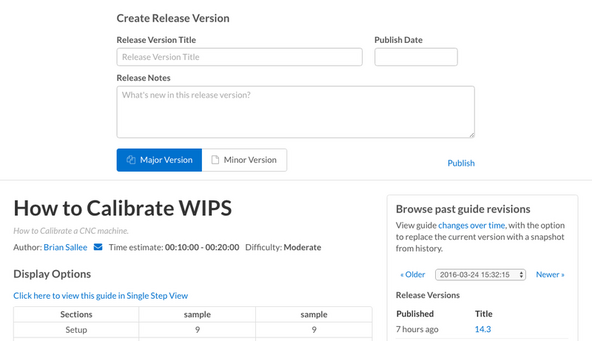 It is important to give your guide a title that identifies which version it is. The “Title” field is where you would indicate what version your guide is. It is most common to title each version numerically. For example, the first version is “V.1”, the second version is “V.2”, and so on.

Use this field to indicate the date and time that the new version of the guide will be published.

To have it published immediately, leave this field blank, or click on the box and select the current date on calendar and simply click “OK” when prompted to enter a time.

To have it published in the future, select that day on the calendar and enter the time you would like it to be published when prompted.

This allows users and approvers to quickly view a summary of the changes without having to view the entire document.

Use this field to indicate what type of changes you are making to your guide—for instance big changes, like adding a new step would constitute a Major version, and small changes, like fixing a grammatical error, would be a Minor version. The size of the release will be indicated next to it in the drop-down menu.

This selection will also determine which Approval Process your new version will be sent through before being published. You can assign a different process for each the Major and the Minor release options. For more information about document control, review the Approval Processes Overview Page.

Reverting to an Old Version

Was an inaccurate edit accidentally published? Or did something that has changed get changed back again? Have no fear. Version Control allows you to easily revert back to displaying an older version of your guide. 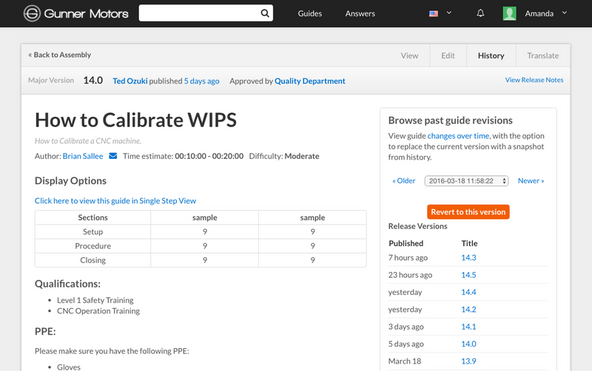 Viewing the Version Status of Your Guides

You can view which of your guides are up-to-date, have unreleased changes, or are unpublished using the Version Control Management Page.

Was this article helpful to you?

Thanks for your feedback!

Didn't find the answer you were looking for?

Your vote has been recorded.