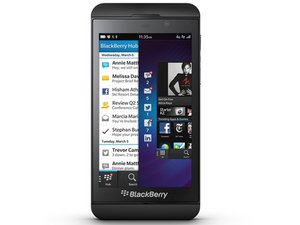 The BlackBerry Z10 is a touchscreen-based smartphone developed by BlackBerry, previously known as RIM.

This is my first post here. Great site! Glad I found it...

Im faced with a dilemma here... I have a BB Z10 that has crashed and is "Frozen" in the boot cycle. I have 6 months worth of memories/photos of my kids that I stupidly didn't back up. The 7 hours (no lie) that Ive spent scouring the web today desperately seeking a way to retrieve the photos off the phone have all been dead ends. Im told that I have to basically reset the phone and restore it to factory settings which will cause me to lose all my photos and videos. Im wondering if the NAND flash (which I assume is where the photos are stored) can be removed (by a skilled tech) and placed into another BBZ10 so that they can be accessed/retrieved? I know it may sound silly but Im desperate and I really am hoping I can rescue the photos and videos from the phone... Anyone have any advice or insight on this matter? Any help or advice would be greatly appreciated. Thanks, Mark.

On a side note, if anyone knows of any means or has suggestions for retrieving the files/photos off the phone without having to tear it down/open it up that would be great! Thanks again...

Hello friends , I want to commend the initiative of this forum.

I have problems with my blackberry z10 . I was doing the update from the phone and suddenly after installing the phone no longer boot . it loads at startup and displays the logo blackberry 10. But after that, nothing remains eran the phone remains black and without turning on the LED flashes. help me please , when I connect a blackberry link does not detect the phone what to do ??

It is impossible to recover your data that way. I would try to connect the device via JTAG and read data that way. May be slower but you still get the data. Once you are done you can also upload new bootloader and set the device to factory setting. More about android data recovery here. Good luck.

The NAND flash most likely couldn't be swapped into another phone. I'm not a BlackBerry expert, but on most cell phones, parts of the flash memory that contain important system files are encrypted with keys unique to the phones that they came in. Installing the NAND flash in another phone would most likely cause even more problems. Do you have a MicroSD card in the phone? You can take that out, put it in a card reader, and access the files on it independently from the phone. If not, recovery might still be possible. The first thing to try would be booting the phone in safe mode (If you haven't already tried it, you just turn the phone on while holding the escape key) The next is a little more risky. I don't know how the BlackBerry filesystem works, but if you can plug the phone in and mount the internal storage on a computer, you could theoretically use a data recovery program such as FileScavenger to recover the files that have been damaged or deleted. This, however, would require that you restore the phone to factory settings first. You could also use this method that looks specifically tailored to the Z10. If you can't get the phone out of the bootloop, you don't have a lot of other options so the data recovery after a restore might be your best bet. Good Luck!

hello sir . yesterday i try to do my blackberry Z10 reset my phone but after restart show the error on my screen www.bberror.com/bb 10-0015 . now i start to do upgrade my phone software then they show that u r phone already update version got . now my phone not start until now show upside error only what i do sir please give me advice