Well…I'm the idiot. When swapping out my ram, I broke the tabs that keep the ram boards in place. (See step 4 - RAM in the topic called "Installing MacBook Pro 15" Core 2 Duo Model A1211 RAM").

I repaired one for a customer with a 5mm cable tie I cut to span from the screws on either side of the ram slots. I drilled holes in the cable tie and used longer screws in place of the originals. He also broke the bottom retainer so I added some non conductive filler to keep them both in place when the Bridge is tightened down.

This was my solution. Wide enough cable tie measured and marked to make holes with ice pick. Used existing screws (each with different diameter threads so be careful to not make holes too big). Use fingernail clipper to cut off excess tie. I have photo but don't see how to upload into this post.

Here's a picture of the logic board showing the tabs. http://www.usedmac.com/catalog/images/18...

After breaking the first tab, you continued and broke the second? To avoid more costly repairs, and the logic board is pretty expensive, I would suggest taking it to a older experienced technician who might be able to secure the RAM modules without replacing the logic board. Soldering a new RAM receptacle onto a logic board is not something even I would want to attempt. Honestly some people are just not cut out to do delicate computer repairs.

Yes. I know I will be booed for this answer but I'm looking at what's best for Peter.

I happen to agree. When upgrading my RAM I tried to force the RAM in place and broke the top case ribbon cable. Patience is key when doing any repair. +

A heavy rubber band around both sticks might hold it in place. Putting weight on it and superglueing it into place might be another option

Superglue -jeez. Actually something i'd McGyver myself, but think a moment about the next repair guy. Poor chap

There should be a way to install a foam spacer between the memory door and the ram stick that would make pressure on the ram stick and keep it down in its slot.

Be sure its non-conductive foam. Ralph +

Don't feel too guilty. I did the same thing on an old MacBook when I started out repairing Mac laptops. Luckily it was a "practice" laptop to experiment on and wasn't an actual job. Im glad it happened then because now I am extra careful when doing RAM upgrades for friends and clients.

There are many delicate and extremely small screws, parts and wires inside a Mac laptop and no matter how careful you are, something could be pulled off the logic board. When this happens, sometimes a part can be soldered, sometimes not and the logic board has to be replaced which is expensive to do.

The only way I found out about repairing Mac laptops was getting old practice machines that people were throwing out anyway, opening them up, taking them apart, trying out various tools, and studying the inside with a magnifier light.

I always use a Black Stick spudger to gently tweak the RAM clips on laptops to check the resistance. I have had some laptops that it took both hands and a lot of push to get the RAM chip seated properly. This usually happens on the older machines. Good luck though next time

+ for the comprehensive anwer. I noticed that RAM chips on older Macbooks sometimes look corrodet. Anybody with any knowlegde about the whys and fors?

I used a plastic shim to cause pressure on the ram from the bottom case. Works perfectly. Never a problem since!!!

I used some rolled toilet paper as the 'shim'

i have the same problem now. One of the ram clip is broken. would you briefly explain how did you solved the prob with the plastic shim? If you could recalled, would you able to post a picture here? thank you and appreciate your help and time

Here’s my fix with a plastic spudger 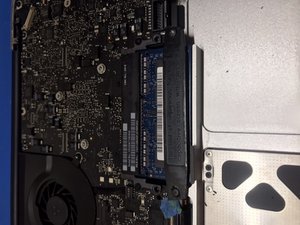 I accidently broke one clip off, stopped to ponder and came up with a what i think is a nice solution:

I went on and broke off the other clip. By doing so, i managed to create an clear path between both logic board screws to the right and left of the ram. then i went and found a thin plastic piece, which i cut to the correct rectangle size and drilled a couple of holes, one on each side.

I then seated the ram in, pushed it down with the plastic rectangle, and screwed in the logic board screws to firmly hold the ram from jumping out.

I DID have to use the longer fan screws since the originals in those places were too short for the added plastic width.

I used the shorter screw on the fan instead.

It works… and it’s pretty easy to do with a simple ruler, exacto knife, and a heated nail… (or more sophisticated tools if you have them). 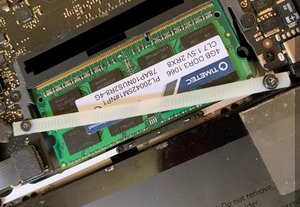