Can a slow SSD make my fan loud and slow my laptop?

I have a Macbook Air 13” late-2010 (A1369) that I purchased second hand. It’s really slow and the fan is loud when doing simple tasks. The battery also depletes in about an hour of moderate use although I am aware that I will need to replace the battery as that is a separate issue.

I’ve attached a screenshot of About This Mac. 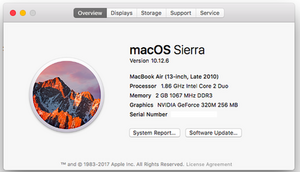 Could it be possible that my current SSD is causing these issues? I ran a disk speed test and it’s showing this:

I’ve got another laptop (Macbook Pro) and its SSD read and write speeds are under 500 mb/s and runs really fast.

Should I just replace the SSD with one that has fast read/write speeds? Any suggestions would be really helpful!

Here is a TG Pro screenshot on the MacBook Air’s Diagnostics: 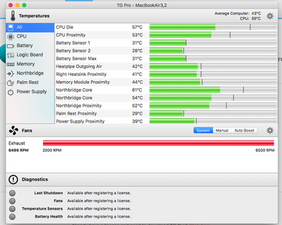 Something else is going on here. Can you find out the history on the system? Sounds like this system has a thermal/voltage sensor issue so SMC has throttled down the CPU. Did the system get wet?

Not that I know of. All buttons are working and the trackpad is fine as well.

Lets try running the onboard diagnostics. Restart the system and press the D key before the OS starts to load.

I've installed TG Pro and attached a screenshot above on my post. Hope that helps!

I tried to run the Apple Diagnostic test but it said "Apple Hardware Test does not support this device". Understandable as it's 2010, very old!

SSD drives do not cause CPU throttling and full speed fan spinning but batteries do.

Try unplugging the battery from the logic board and see if things get back to normal running the Mac from MagSafe only, if that’s the case you just need a new battery. If you get no change in picture without battery there are a number of things that may cause such issue, a faulty keyboard/trackpad cable, an SMC issue, and so on… hard to tell without previous history.

I've just tried this now and the fan's still insanely fast and loud just after turning on the laptop and watching Netflix. The laptop is slow and lags when watching videos. I turned the laptop off and when I put the battery back I noticed that the logic board is really hot too, even with just MagSafe powering the laptop, so it's not the battery. Do I need to replace the logic board?

Is there any way of checking other issues? All the keys and trackpad are working so I assume that they're not damaged.

ALSO, I have got only a 60gb SSD, could this be causing the issue? Do I need a bigger SSD?

@kresan If the Mac never got any maintainance thermal paste would be pretty useless by now for dissipating heat and needs to be renewed. I've been using for some time a 11.6" C2D 1.4Ghz Air with the same RAM with netflix without any issue, no lags, no overheating, and that's a way slower configuration. With just one hour working time, battery surely needs to be replaced. I'd recommend first to replace thermal paste and battery and then reassess the Mac behavior before thinking about the logic board.

Look at the TG Pro snapshot the thermals are not running high! Just focus on the CPU die and the heatsink numbers they make it clear the system is not overheating or have any reason to push the fan to the max.

This is not a thermal issue, its a SMC voltage sensor issue which is not visible here. Apple diagnostics would have shown it but good old Apple killed it! TG Pro should list it in the full version.

With fan spinning at 6500RPM @danj I'm not surprised the temperature is within acceptable range, yet quite on the high side with no heavy tasks running. Battery was connected too at time of test. I'm quite convinced new thermal paste is a pre-requisite here to check if without battery temperatures get back in range. Of course any further troubleshooting advice would be welcome if available since I ain't got better ideas to help out ;)

@arbaman - Look at the high water ticks they didn't exceed the value of a moderate to high fan setting not the push to the max value, besides the time of the snapshot is so much lower the fan would have long since lowered to a more normal RPM.

Trust me! I've been servicing these systems a long time. This is not a thermal issue. TIM is not the root issue. The logic board has a SMC power sensor problem.

OK, clearly the Fan is out of wack! So is this just a bad fan or something deeper? As you also state the system is slow we can surmise SMC is telling the CPU to run in Safe Mode which means either a sensor is telling SMC the system is hot or is failing to detect either the temp or the voltages are not correct on the logic board.

As we can see all of the thermal sensors here are all within reason, we know one of the voltage sensors has failed. If you got the full version of TG Pro it might have given us a bit more. Did the seller give you the original USB drive that came with the system? If he did you could give the diagnostics on it a try. Even still you will need the proper tools and access to the schematics and boardviews to locate the bad component and lastly access to the needed part.

The other direction is just replace the logic board Logic Board 2.13GHz (4GB CTO) Apple P/N 661-5734 this being the best board you can get and worth getting as an upgrade for your current 1.86 GHz 2 GB board and for some reason cheaper! Logic Board, 1.86GHz, 4GB RAM

I've cleaned out the dust from the fan, so I don't think there's anything wrong with it as it's functioning...

I haven't got the full version of TG Pro and I've not got the original USB drive that came with the system. I've read that I can request this from Apple's Customer Service. I'm going to have a think. Are there any free applications like TG Pro that you can recommend? I want to explore all my options before I decide to purchase. It would be good to know if it's something I can repair and replace myself.

Otherwise the only option is replace the Logic Board, but they are quite pricy and at this point I think it might be better to buy another Macbook entirely...

These are nice systems but they do have their limits. Hopefully you can get your money back from the seller if you think going with another system would be better. If the price was low I would take the gamble in getting a replacement logic board. With the better board installed you should be able to recoup the investment if you decide to sell it in a year or so,

Other than using Apples diagnostics and TG Pro I don't find any other free tool offers much use diving into the other SMC errors conditions, here voltage sensors.

SSD is performing fine for this model. The heat and battery drain is due to software load becomes too much for this old rustbucket.

Check task manager or whatever it is called in macOS to identify what process is hogging the system during idle. If nothing, then this system is too old anyway.