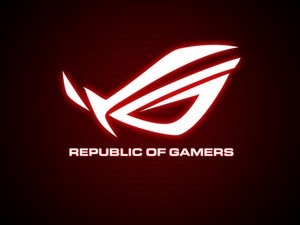 My Asus laptop (I think it’s gl rog something.. but I know it’s a gaming computer)(edit: it is Asus Rog GL552VW)

wont turn on after shutting it down. Right now, my laptop can still charge since the battery light turns on when I plug it in. Although, when I try to push the power button or hold for 30+ secs it won’t turn on.

This started at Aug 16 around 2am when I was running after effects in my laptop. I noticed how it was running laggy so I tried shutting it down to make it run smoother. After shutting it down I left it off for the rest of the night. The next day (Aug 17 around 10pm) I tried starting my laptop and it won’t turn on at all but is still charging.

Things I have tried that did not work:

1) Held the power button for 30+ secs while charging

2) Took off charging and waited about 30mins, then I tried to turn it on once and tried holding the button again

At this point, I’ve seen people write that they just left it alone for 3-4 days and it worked again. So I’m probably gonna wait until I get an answer here

Might be a label on the unit's bottom showing model number etc. Knowing exactly which model it is will help others help you.

Thank you, I actually know what it is now, Asus rog GL552VW

i had the same problem and i couldn’t to fix that yet.

I have the same problem with my Asus gl753ve. I send it for repair they say the battery was broken. Got it back and it worked fine the first days. Now its dead again

Did they give a guarantee on the repair?

Most reputable repair services give at least 30 days guarantee on their repairs.

Contact the repair service and tell them that the problem has not been fixed.

@acervasio was talking about the CMOS battery not the main battery.

Here’s a link to a video that shows how to dis-assemble the laptop.

Here’s an image taken from the video that shows where the CMOS battery is and what it looks like.

After dis-assembling the laptop to a point where you can get to the CMOS battery (ensure that the main battery is also disconnected), disconnect the CMOS battery from the motherboard and then press and hold the Power button for 30 seconds to ensure that all residual power is drained from the motherboard and that the BIOS will be reset to its’ default settings.

Reconnect the CMOS battery and then re-assemble the laptop and check if the laptop now turns on.

Thank you very much. Problem started half a year ago, with needing to hold power button for couple of minutes, or pressing other buttons with it to turn on computer. Today it just fell asleep and wasn't responding when I came back.

Your advice solved all this, thanks again (y)

I have the same problem with my Asus gl552vw but my problem is that I have a damaged chipset in the motherboard.

If you can find the chipset component make and type identification information printed on the chipset, you may be able to buy the component BUT it will also need to be programmed to suit the motherboard and I don't know where you would get the full programme. The chipset driver software that is provided on the manufacturer's laptop support page is not the complete program and it most probably is not even for the chipset itself but is for the BIOS chip and it tells it how to interact with the chipset etc.

You may be out of luck unless you can source a damaged GL552VW laptop or motherboard and swap the actual chip over.

Thank you very much

This may be a long shot but I would try removing the cmos battery and letting the laptop sit for ~30 seconds, then put it back in. If that doesn’t work, try re-seating ram sticks one by one to see if one is at fault.

It could be that the CMOS battery is failing and that the BIOS is being corrupted preventing a normal start. When the main battery is flat the BIOS may reset back to its’ default settings as there is no longer any power on the motherboard and this allows for a normal start the next time but then maybe not after that.

I would check the CMOS battery first to make sure that it is OK. It is a non rechargeable Lithium coin cell battery that should last from 4-5 years but maybe not. Usually it is a CR2032 type battery (the type number is printed on the battery) which should measure 3.0V DC. If it measures <2.6V DC replace it. It is a common battery, available most everywhere.

Unfortunately, you have to remove the motherboard from the laptop to access the CMOS battery.

Here’s a video that shows how to disassemble the laptop to remove the motherboard.

Here’s an image taken from the video that shows where the CMOS battery is located on the underside of the motherboard. When removing the battery take note of the orientation of the battery for when you go to reinsert it back again. Usually is is +ve on top (this is marked on the battery) 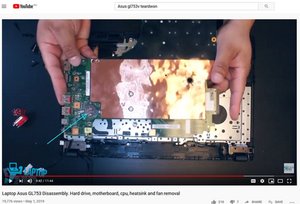 When starting the laptop the first time again after both the CMOS and main batteries have been removed/replaced etc there may be a message regarding incorrect date and time. This is normal as the BIOS has defaulted back to its’ factory default settings. Once the date and time have been corrected the message will not show again when starting.

I had the identical issue with my ASUS X202E laptop. To speed the full shutdown, hold the off button down for about 40 seconds while disconnected from power. Next, cool the machine! I put mine outside on the deck for half an hour in a Vancouver December afternoon. Then, restart and immediately go to power management in settings and select the Microsoft Windows 10 recommendation for “Balanced” not the ASUS power settings. Since doing this, I have had no further issues.

Hello, same issue with a V752, tried everything mentioned here, no results.

I pulled out the RAM, one by one and I found that one is dead! Problem solved, now the Rog is back to life.

Hi its the same for me but I've had to take my screen fully off was hoping to use it with my TV but won't power on atall did at first after removing the screen full but no life atall would it be wirk taking the the shop ?