Where is the backlight fuse located on the logic board?

Pondering the possibilities of the mosfet being blown or could it be the backlight driver IC? I hope not. Finding a new LP8561 backlight driver may be tricky, and desoldering/re-soldering much worse.

That Q8102 mosfet is either blown or told to be turned off by the backlight driver. I wonder if there is a safe way to override the BKLT_SHUTDOWN signal to force the mosfet to turn on, which could confirm if it’s still ok or not. But that’s a p-channel and I don’t see how the backlight driver IC gives the mosfet its negative trigger voltage.

I've tried locating a datasheet for that LP8561 driver and couldn't find anything at all. I need to figure out how this thing works, so I can find out why it's not enabling the BKLT_SHUTDOWN signal.

All 4 diag LEDs are lit, when the screen is connected, so it's detected and power is supposed to be sent to it, but it's not. What could do this? What else am I missing?

I know the 12V does arrive on the Q8102 mosfet, but it's not enabled to pass through it. It could be blown, but at present I doubt it because the BKLT_SHUTDOWN signal is not telling it to turn on.

That signal comes right from the backlight driver IC, so either that's the one that is blown, or something is telling it not to enable the power to the screen. 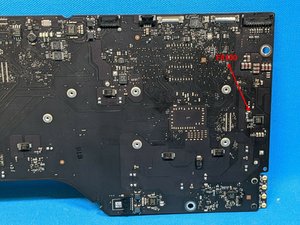 Yes, boardviews are available but are not being shared due to copyright issues with that company. Looks like you can get them from places https://laptop-dz.com/apple/apple-820-35... or similar on here

Ok, that's much better and more helpful to track down the real issue.

Turns out, that fuse isn't blown, which I find rather weird, because the BKLT_BOOST was shorted, with 2 blown caps (the 2u2 bank).

That explains why there is no backlight. I do know there is video, which we can see displayed when we shine a light on the screen, so only the backlight is out.

There is a BKLT_SHUTDOWN signal, but I can't measure this properly, with limited measuring tools.

Could be either that mosfet Q8102 or hopefully not that IC U8100 that generates that signal.

What is that U8100? A uController? Hope not. Not easy to find, and changed.

Sorry not at a place to check the schematic. Common error would be the the transistor. Check by adding 12V (external)to that line and see what happens? I can check after my shift at work and see what I can find that may help you.

Wouldn't it be easier to force the mosfet to turn on by its gate? However, would that be a potential danger to the output from the LP8561 backlight driver. I couldn't find anything, not even a datasheet on that driver. What kind of output does it have for BKLT_SHUTDOWN, and what is its voltage level when not doing a shutdown?

Did you ever get the boardview and schematic?

Not sure if this will help but here is a similar question. It seems to be for a different logic board spec but the same general model of iMac. Check out the answers there and you may find the information you’re looking for!

That one is for a slightly different logic board, and part numbers differ somewhat. Plus not quite the same issue apparently.

Thanks for the clarification, sorry for the confusion!