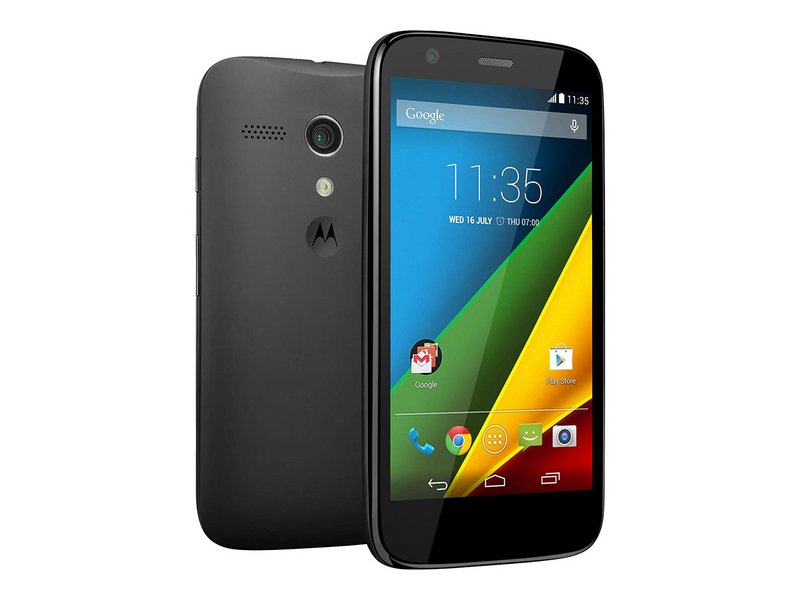 The Moto G is Motorola's economically priced phone. It has all the features one could want in a smart phone, for half the price. Model numbers XT1032, XT1033, and XT1036.

The Motorola Moto G was launched on November 13, 2013 and after six months of its release around the world, it became one of Motorola's best selling smartphones. With a 4.5" 1280 x 720 LCD display and Android 4.3 Jellybean operating system, it is heralded as one of the best smartphones for its inexpensive price. Price beginning at $179, the phone became an inexpensive option which easily made the phone a best seller globally once it was released. It was received so well that Motorola created a 4G LTE version months later and a 2nd Generation a year later with upgraded features, such as a microSD slot and a bigger screen. It continues to steal the show when it comes to low cost smartphones and has forced competitors to create their own low cost high-end phone.

To identify this phone from other Motorola products and the second generation, you can look for several things: It has a 4.5 inch display and the front camera is located on the left side of the earpiece. The earpiece is quite small, only about 0.5 inches in length. On the back of the phone, the back speaker is located on the left of the back camera and the Motorola logo is silver. This version of the Moto G is not easily distinguishable between the 4G LTE version. The one true tell of which version you have is whether or not your phone has a microSD slot. The Moto G 3G does not have one, while the 4G LTE version does.

Have a problem with you Moto G? Follow this link to the troubleshooting page to get started on fixing your Moto G today.