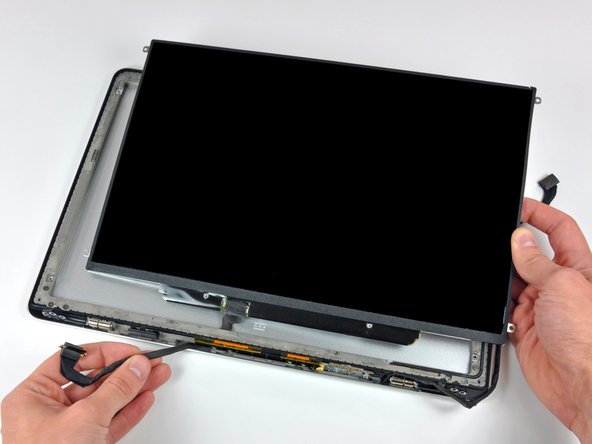 Save money by replacing just the LCD rather than the whole display assembly.

I followed the steps regarding removing the display glass, since my old one needed replacing. Unfortunately it did not come off, even with a good amount of heat from a heat gun. I felt any more heat would start to melt things. Eventually I tried prying a corner, which caused a crack, and ultimately I ended up chipping out tiny shards of glass everywhere. Eventually I got it done, but it was a royal pain. BE CAREFUL AND WEAR SAFETY GLASSES.

There are other guides for replacing the LCD on the 13" Macbook unibody without removing the whole display assembly. I tried this and had some problems when it came to reconnecting the new LCD to the LVDS. The main problem with this is that the LVDS connector cable is very short and therefore there is not a lot of room for plugging it into the LCD. After a while I decided to follow the ifixit guide and remove the display assembly. This made things very easy since I could push the LVDS cable back a little which gave me enough room for reconnecting the LVDS easily.

Removing the glass front was difficult at first. I used a cheap suction cup (not from ifixit) but the glass didn't come off at all. At some point the suction cup broke, the rubber just came off. So I used a hair dryer and a credit card to get into the lower right corner. I started by placing the credit card in the small opening between the edge of the glass and the rubber lip (at right angle). Then I carefully and patiently dug into the corner, and as soon I was in I could carefully detach the glass from its adhesive (frequently using the hairdryer). Maybe I was just lucky, but for me this worked fine.

The rest was pretty easy (except reconnecting the LVDS which was a pain at first; see my other comment). I used permanent double sided tape to put the glass back on, which seems to work just fine.

Ok I tried to remove the front glass with a hair dryer with no success. The back case became so hot I can't even hold it to pull this the suction cup...

So I borrowed a heat gun and it was very easy to remove. I was surprised. I heated until I saw steam inside the panel through the glass. I then pulled hard on one corner ands it came. After that the all glass came easily without reheating.

After the LCD panel exchange I manage to have no dust or finger tips inside and put the glass back on its old tape glu. And shazam !

Thank you all was ok.

Shards of glass everywhere! Do not attempt this repair unless you have a backup display glass on hand (or are prepared to shell out for it). This is not for the faint of heart: even with what seemed like excessive heat-gunning, the adhesive was too fused to everything to be able to remove it without cracking (my suction cup popped it out, and the spudger was useless for getting under the corner).

Does anyone know if that inverter can be purchased somewhere. I've tried ebay but no such luck.

Problems - heated glass too much and think I melted the display glass as a clear droplet formed on the inside.

- was unable to get any glass up at all despite extensive use of the heat gun, ending up cracking the glass trying to insert a knife under an edge as the glass was not budging at all. Was able to use knife to run under the glass after that.

- some plug popped out whilst trying to reinstall the clutch cover which was difficult to reinsert, and there is little space for the cables within this cover

However, after all that, the operation appears to have been a success and everything works again, including wifi, eyesight camera and the new screen.

All in all, it was touch and go, Good luck with this procedure.

Thanks for the advice ifixit.

Thank you for the guide. The cover glass gave me a real hard time, but I managed to get it out in one piece. The key is patience (lots of it!!) and heat. Careful with the heat gun, though. Too much heat and the inner face of the glass panel will deform permanently (some kind of laminate, I guess), with small ripples ruining the job. Anyhow, two thumbs up for iFixit and the author. My laptop is running strong again.

I did this procedure in 2012 and it was a total disaster, even though I'm exceedingly patient and love tinkering with difficult repairs.

My heat gun overheated the display, so all the edges (about 1.5in in from each outer edge) were much much darker than the rest of the screen forever after that.

The glass cracked while removing it - I couldn't get any edge/corner to come up without shattering. I ended up spending hours chipping away hot shards of broken glass - total nightmare.

I started out with just a bad cable, and ended up having to buy replacement LCD, glass, and of course the cable.

Since then I always simply buy new/used top clamshell assembly with everything included, it's much easier and safer and ultimately cheaper - especially if doing this for a client or business-use machine.

The only way I'd attempt this again is if I was unemployed and broke and it was my only computer and somehow just didn't have any other options whatsoever - I can't imagine a scenario that would get me to try this again.

My original display was going bad with wide vertical lines of mis-mash showing up on the right side of screen. The display glass also had a small 3 inch wide crack near screen bottom. So I ordered new glass, and an lcd panel from ifixit.

Great directions and illustrations! The main problem I had was getting the display data connector re-attached to the new lcd screen fully (reverse, step 32).

The weird angle of the receiving receptacle, the way the cable is twisted and how bloody minute the connection is, all combine to make this a painstaking and tricky match-up. I hooked up tother end of the cable to logic board and powered up MacBook to test before re-assembly. Screen was blank. I played around with the connection further to make sure it stayed fully seated when lcd screen was positioned in display assembly and cable stretched out. After a couple of tries the display illuminated. Miracle!

Re-assembled all the parts back together and everything works correctly (except Bluetooth - I never use).