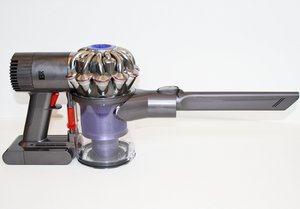 The Dyson DC58 is manufactured by Dyson. It is an easy to handle, handheld vacuum powered by a V6 motor that provides powerful suction for up to 20 minutes.

I can't open my Dyson to empty the rubbish

I can't release the red lever that opens the bottom area to empty the trash.

I've had my Dyson for nearly 2 years and this problem is new. Please can you help.

Can you move it at all?

red button is up and stuck. won't move up or down.

Mine is a v7 car and boat

I can't open my Dyson to empty the trash out

I have the same problem on the Dyson V10 Animal. I was afraid to apply too much pressure on the red tab, which needs to be pushed in the forward direction to open the canister.

I did not want to risk breaking the transparent clip at the bottom of the canister with a screwdriver as recommended above.

I found once I had opened it, I observed that the red clip locks onto an outpouched area on the main device (See picture with green arrow). 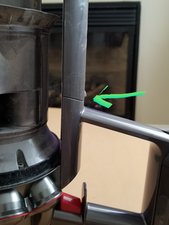 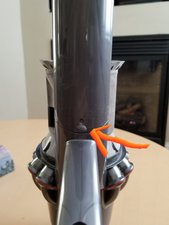 I had added two pictures when I originally posted this. I am uncertain as to why they did not show up. I will try to find them and add them again.

I was rereading the answer and decided to revise the last sentence (revision in all caps):

This should require no great amount of force and no tools.

If you have cleaned the dust container, it does not slide easily. Therefore when you push red handle, you need to push cylinder from edge so handle will not be stressed. I recommend to try it after cleaning some place and fill container with dust. Because dust make container to slide easily.

I was pleased to read this as I had the same problem (DC44 Animal, 7.5 years old). Likewise I didn't want to break the red plastic clip by forcing it.

Although I felt I needed 3 hands to perform the suggested solution, it has thankfully worked.

I have now sprayed the clip and channel it moves in with WD40 in the hope this will keep it opening and closing smoothly.

In my experience these small plastic components are the most likely things to break with a Dyson.

I got it. The pull on mine needs to be up and back. Confusingly the red lever will allow you to push a little both down and forward and up and forward to no avail. Up and back does the trick.

Immediate fix by lifting up then pushing down. I was getting tense. Big thanks, N

Thanks I just had this problem and you solved it for me very nicely, much appreciated.

The fact of the matter is all this is well and good, except for the fact i am not going to hold my tongue sideways, stand in the light of a full moon wiggling and jiggling this and jacking that to get a simple switch to open the next few hundred times i go to empty the dust bin. Back in the box and back to the dyson geniuses who can get a vacuum to suck chrome off a trailer hitch but can’t make a reliable latching mechanism on the dust bin.

Just keeping it real. Stuff that doesn’t work correctly gets the boot around here.

WD40 has really fixed most of my problems ? i only faced it after over a year ?

What part did you spray with WD40?

This worked for me and I also have arthritis in my hands.

when closed, apply a small pressure on the grey column in front of the fed slider.

take a close look at the little grey plastic lip that forms the lock.

Thx will bear in mind after much swearing and wiggling it round, it worked.

It worked for me once I put the pressure on the other handle as stated. Thank you so much. I have limited mobility upper body and this worked immediately.

If you have cleaned the dust container, it does not slide easily. Therefore when you push red handle, you need to push cylinder from edge so handle will not be stressed. I recommend to try it after cleaning some place and fill container with dust. Because dust make container to slide easily.

We had the same issue with our V11. Fine dust was getting in the area between the plastic ribs and the collar of the lower portion (near the electrical contacts) causing the plastic parts to gall, which closed tolerances and caused the jamb. My wife did not have the strength to separate the canister. I was able to get it apart, clean the area, and lightly sand the galled parts. This allowed it to work smoothly without jamming for about one or two tries and then the fine dust was back to jamming it again. We returned the Dyson to Costco. This is an unfortunate design flaw because the vacuum is otherwise awesome.

WD40 has fixed my problems ? It helped a lot. Been having my vacuum for over a year and absolutely loving it.

Same for the Dyson V10 model. I've had so many issues with it. First, a damp filter short-circuited the machine. I reached out to support and they sent me a replacement trash container, which had nothing to do with my machine not working. Since every conversation is automated via chat or phone, it took me two months to finally talk to actual person via email. They gave me a return label to send the machine back, and thankfully that fixed the machine, BUT now there are even more issues. 1) Dyson never sent back my quick release adaptor, so I had to reach out to support again to send me a replacement one, and 2) now the trash container is jammed.

It has been issue after issue with the Dyson vacuum. I will not buy from them again.

Hey, their customer service on twitter has been amazing ?

I had a REALLY hard time opening the canister on the refurbished V8 (first one I bought was new, this one was for the cottage) and found out it wasn’t the mechanics of the way it opened, rather the rim of the canister seemed to be too tight and sticking. So I put a little WD on the rim and wala! opens with ease!

Fantastic. WD40 all over the rim and any joins Was about to throw Dyson through the window 😃Thanks for your help👏

If you are trying to remove the clear bin, the bottom must be open for it to come off.

I know that- thx!

i was facing a similar issue with my Dyson v11

I used a screw driver to sneak inside the opening to pry open the canister. Once the canister flap was released, i removed the canister (i had just cleaned it) and wiped any left of over dust i might have missed during my cleaning. then i used some wd40 on the canister where the mechanism would be. Also removed any dust with an old soft toothbrush. before putting back in, i wiped off most of the wd40, then the canister would slide in and out no problem ?

Our Dyson D11 Animal+ wasn’t opening. I had to push the hatch shut and ensure the canister was completely seated and sealed in on both ends, after doing this the red latch release worked fine.

On my V8, I used a small screwdriver to lever back the spring clip at the bottom of the bin, then opened the bin door. This spring clip is designed to work like this and you will not damage anything..

This enabled me to empty the dust out and look at it in detail. There are two small cross-headed screws fixing the bin to the bottom of the battery case, and on my V8 these were a little loose after 3 years of use and there was movement between the bin and the battery frame

There are two Torx headed screws holding the top end of the bin with a bracket, removing these and the bin came off with its red release lever. Remove any accumulation of dirt & dust under the lever.

The top of the cyclone chamber was then pulled off and behind it about half way down the handle is the spring latch which locks the bin in place. . Mine looked ok so after cleaning I slotted the cyclone chamber back in and tested the release lever. Without the bin it worked perfectly, so I decided that the 2 loose screws mentioned above were not clamping the dust bin tightly enough.

After reassembly the bib release handle worked fine again, though as one contributor mentioned, a little WD40 or Silicone spray will make the opening work more smoothly until a coating of fine dust builds up to lubricate the movement.

My Mother has just bought a refurbished V7 from Dyson on Ebay. You need to pull on the red lever really hard to start the bin moving and she does not have enough strength to do this using two fingers under the lever. Dyson offered to replace it, which seemed pointless if they are all the same, so I measured the force required on the red lever to release the bin. It took 4kg to start it moving and almost as much to pull it all the way and realease the bottom lid. I repeated this test many times and 4kg was the average figure, when pulling with a spring gauge at the optimum angle (upwards and slightly rearwards).

We asked Dyson if this was normal and they have not replied! Can anyone tell me how much force it takes to open their canister?

I tried the WD40 treatment and to my surprise it worked. The canister catch opens and takes much less effort. I still have to open it fully as it doesn’t spring open as it does in the advert. However, it does open. Result!

"I tried the WD40 treatment and to my surprise it worked"

Thanks for the advice. I did take it apart and found the mechanism worked fine without the canister in situ, so it seems the problem in my case is due to excessive friction between the circular rubber seal in the canister and the cyclone body. It was easier to empty after lubricating that rubber seal, but I don't relish the prospect of having to visit my mother to do this on a regular basis!

Does anyone with a Dyson V7 or V8 know how mush force is required to pull up their red lever?

You need to close it completely before trying to open it.

After reading the above I used a lot of downward force on the red bin release button on my V10. That did it