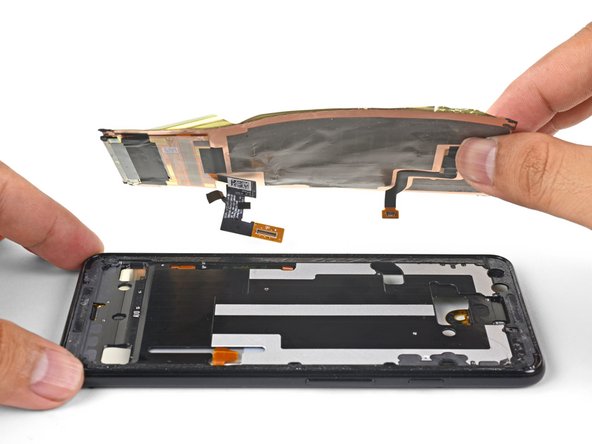 Follow this guide to remove and replace a broken or cracked screen on the Pixel 3. This procedure is for replacement screens that are not pre-mounted onto a frame. Due to the Pixel’s design, this requires removing the motherboard in order to access to the screen connectors.

This procedure will destructively remove the Pixel 3’s screen. OLEDs cease to work when exposed to oxygen or moisture, and are thus sealed in an airtight encapsulation (this is also why OLED panels turn black underneath a screen crack). It is very difficult to replace the front glass alone— the Pixel’s OLED layers are laminated to the glass.

To change only the screen glass… Do you have to disassemble the whole phone or just steps 39 to 42?

The OLED is bonded to the screen glass. Unlike LCDs, trying to remove the glass only will most likely destroy the OLED screen.

How to differentiate between a pre-mounted and a non pre-mounted display? I don’t want to order the wrong part, hence the question.

The pre-mounted part will come with the frame, which is the majority of the phone body. The screen is already stuck affixed to the frame, but you would have to transfer everything else onto it. The display only part looks like a thin panel with adhesive on the back. It would look like this part.

When buying a replacement screen do I need to buy it with a frame?

This guide is meant to be used with replacement screens without frames. If you buy a screen with a frame, you will have to transfer many components from your existing frame onto the new one.

My Pixel 3 has a broken screen and also the touchscreen is not working (well, only for half the screen; the top half works just fine, the bottom half does not). Will this guide and replacement parts also fix the touchscreen functionality?

This guide should resolve any issues with the screen, which includes touch functionality.

Also, only because the part in iFixit is out of stock, is this the same part?

Unfortunately, this is not the same part we sell. Like many aftermarket screens for the Pixel, the linked part uses a cheaper LCD panel, while the original Pixel has an OLED. The part may install properly, but the image quality will be different.

Hi again @arthurshi . Following up on my comment from Dec 2. I bought the tools and replacement screen, and performed the repair yesterday. Thanks for the guide!

Everything seemed to go alright… but sadly, the touchscreen functionality remains broken. I installed the new screen. The phone turns on and the screen turns on just fine, but it does not respond to my touch :(

Do you think then that the motherboard’s circuitry for the touchscreen is broken? Or is it more likely that I didn’t connect one of the two screen connectors (I believe the large one is for the display, and the small one for the touch)? Anything I can do to debug/test where the problem is?

Any help is much appreciated. And thanks again for the very useful guide! Even if things don’t end up working, I still learned a lot!

You are right in that one connector is for the screen, and one is for the touch (digitizer). Both must be connected in order for both screen and digitizer to function. The press-fit connectors contain very small contacts. Any small amount of dirt/finger oils on the contacts may cause issues. You can clean them by wiping with lint-free cloth and isopropyl alcohol.

If the screen still won’t respond to touch after that, it may be that the circuitry responsible for the digitizer is broken on the logic board.

Hey, did you try what arthurshi advise and if so did it work. I am also having the same issue and I would hate to buy a new motherboard. Thank in advance.

I tried reattaching the connectors a few times and testing it out. I couldn’t get it to work, unfortunately. I ended up buying a new Pixel 4 and sending in the Pixel 3 to Google as a trade-in, for which I received $105.

Hope that helps, and good luck!

Hi to be more in depth the problem I been having is that when I took the screen of my pixel 3 there was a piece of flashing(not sure the proper turn that came off with screen it was glued down to mid frame and the screen is supposed to sit in it. Can you buy this part or do you have to buy a whole new mid frame ? Thank you for your time and all your guides they have been very helpful to me.

Are you speaking of the part shown in step 44? If so, that is part of the display panel. It should be fully removed before you install a replacement screen.

Do NOT follow the author's advice to just “bend up the earpiece speaker flex”. This might work fine enough for board removal, but going backwards, you will likely rip the flex trying to jimmy it back in place. The flex is like plasticated paper ribbon. Just remove the earpiece speaker before you reassemble, and place it in its spot after you put the board back in.

Ps. The plastic insert in step 19 should be given a bit more attention. If you forget to reinstall this plastic insert, the screw that you replace in that spot will instatly ruin your lcd - no matter how gently you screw it in. You'll be left with a green or pink line through your lcd. It seems worth mentioning, as I have seen this before.

Thanks for the suggestions! I will make a note of that and your comment above in the relevant steps.