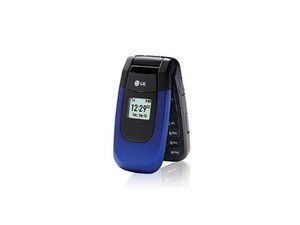 The LG LX150 was released in November of 2006 and features bluetooth, voice activated dialing, one touch speakerphone, and an internal antenna.

The LG LX150 can be identified by following these steps:

The LG LX150 was introduced as a mobile phone for the Sprint network in the 4th quarter of 2006.

Sporting a simple, elegant flip-phone design with a slick blue metallic finish, the LG LX150 showcases multiple improvements and additions to its predecessors in terms of accesibility and convenience. The admirable feature set, including bluetooth capability, voice activation, one touch speakerphone and a slender body case design, was marketed broadly to middle class Americans nationwide.

Initially priced at $179 for the unit, this product has since been discontinued.