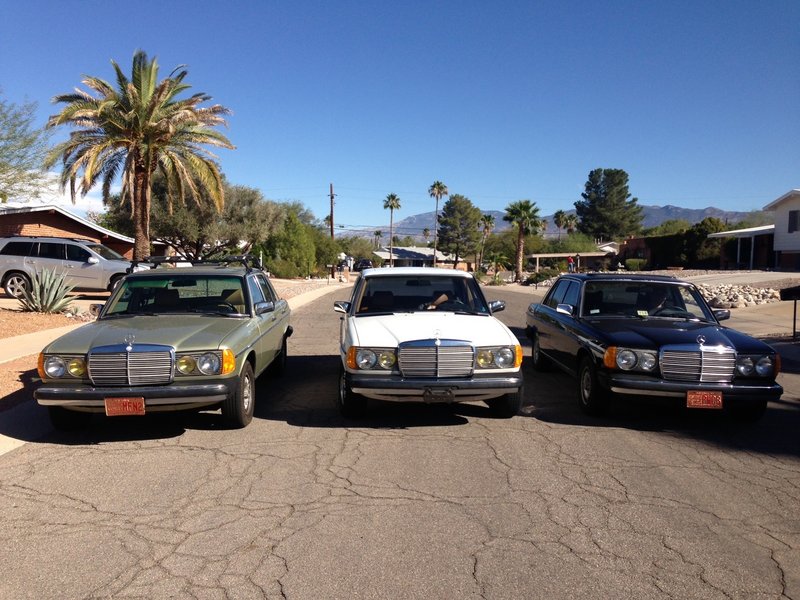 How to Change Mercedes W123 Power Steering Fluid and Filter

How to change Mercedes W123 coolant

How to check Mercedes W123 Fuses

How to check the Brake Fluid Level in your Mercedes W123

How to check the oil level in your Mercedes W123

How to purge your Mercedes W123 diesel

W123 is the internal chassis-designation Mercedes-Benz used for their executive line of cars, manufactured between 1976 and 1985.

Within the W123 chassis, as it typical for Mercedes of the era, cars were named after their engine size, fuel type, and chassis sub-type.

Engine size was designated by its displacement in liters. So a 280E has a 2.8 liter inline-6 cylinder engine.

Fuel type was indicated by the trailing letter after the number. "D" stands for diesel. "E" stands for Einspritzung, which refers to fuel-injection on the gas engines. If there is no "E" or "D" then it is a carbureted gas engine.

Chassis sub-type is designated with another trailing letter after the number. "C" stands for coupe. "T" stands for touring, otherwise known as an estate or station-wagon. If there is no "T" or "C" then it is a 4-door sedan.

It's good to remember that "TD" does not stand for turbo diesel and instead designates the touring models. Turbo diesel models will have "TURBODIESEL" on the rear of the car, but there is no designation between turbo and non-turbo in the model numbers.

Early Diesel models offered in the United States, up to about 1981, were not equipped with turbochargers. Afterwards, the OM617 3.0 liter diesel engines in U.S. W123's were turbocharged (in other parts of the world a turbo charger remained an option). The OM616 2.4 liter diesel engines in the U.S. 240D remained naturally aspirated throughout their entire run. There were also several gas engines across the range. These various W123 chassis models shared many components but also have some distinct differences. Some guides will be specific to early Diesels, some to late. Others will cover all years and engine types.

The following models were available in the United States:

In the United States the larger engine cars, like the 300's, came with a long list of standard items that were options in other countries. They would come equipped with power windows, central locking, automatic climate control, and automatic transmission. Only the smaller engine cars, like the 240D, came with base-level features like manual windows and a manual transmission.